Most areas of the world’s oceans are experiencing habitat loss. But coastal areas, with their closeness to human population centers, have suffered disproportionately and mainly from manmade stresses. Habitat loss here has far-reaching impacts on the entire ocean’s biodiversity.

Habitat destruction is one of five global ecological pressures affecting the ocean, along with fishing pressure, climate change (including ocean acidification), water pollution and the introduction of alien species or genotypes.

Damage or destruction of habitats kills the plants and animals responsible for the habitat’s ecological functions and, in some cases, its survival  and regeneration.  This pressure focuses on destruction of intertidal habitats and two types of subtidal habitats, soft bottom and hard bottom.  These habitats include coral reefs, sea grasses and mangrove forests, but do not include sea ice, which is accounted for elsewhere.

Soft bottom environments include habitats where the seabed consists of fine grain sediments, mud and sand. Soft bottom habitats vary in terms of biodiversity and productivity, depending upon depth, light exposure, temperature, sediment grain size and abundance of microalgae and bacteria. Seagrass meadows are included in this category.

Soft bottom is the ocean’s largest habitat, forming the bottom of most of the continental shelves as well as vast expanses at depths of 3,000 to 6,000 m, which cover more than 60 percent of Earth’s surface (Snelgrove 2010; Ausubel et al. 2010)

Hard bottom habitats underlie all soft bottoms and include all types of exposed rock or coral and associated flora and fauna. Hard bottom areas are located throughout the ocean, and include the mid-ocean ridge and seamounts, but are more frequently found near the coast. The term “hard bottom” includes tropical coral reefs, but can also be used in reference to human-made structures such as jetties and fabricated reefs. The Ocean Health Index does not assess human-made structures.

Intertidal habitats are located between low and high tide lines and can be either soft or hard bottom. The intertidal zone’s area varies geographically depending on tidal range as well as coastal and submarine topography. Plants and animals of the intertidal zone are exposed to air at low tide but immersed in seawater at high tide, so must withstand cyclic fluctuations of temperature, desiccation, strong light (including UV), wave action, and predation by terrestrial and marine species. Mangrove forests and salt marshes are among the habitats included in this category. 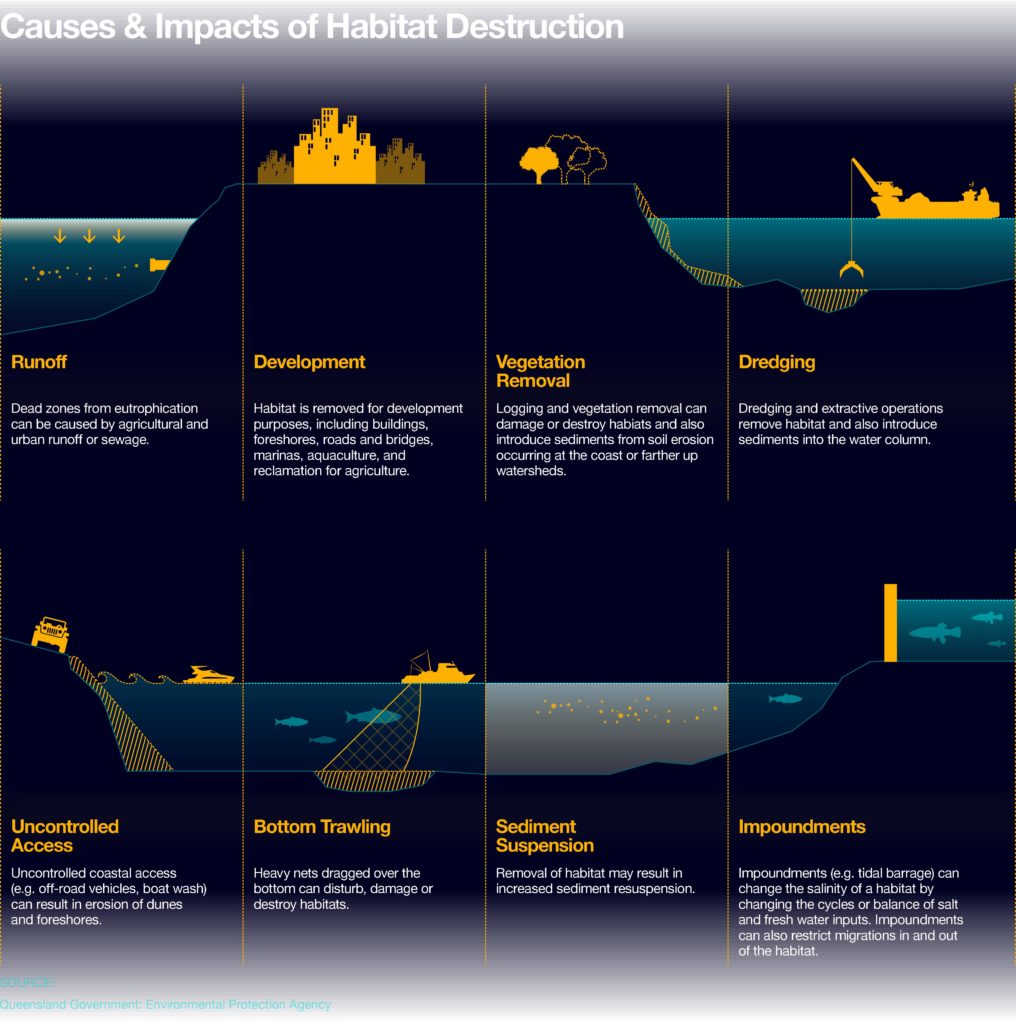 HOW WAS IT MEASURED?

The subtidal soft bottom destruction proxy utilized global commercial catch data developed by the Sea Around Us project, based upon FAO and other source data, in order to determine catch (tonnes per year) from trawling for each year from 1950-2006. ‘Trawlable habitat’ within an EEZ was defined as shallow subtidal (0-60m) and outer shelf (60-200m) soft bottom habitat from Halpern et al.(2008). Total trawled catch was divided by the total area of soft-bottom habitat to produce a measure of trawl intensity per unit area.

The subtidal hard bottom destruction proxy scored regions based upon data from Reefs at Risks Revisited, which recorded the presence of destructive artisanal blast and poison (cyanide) fishing on a country-level basis.  Destructive artisanal fishing practices were given a maximum value of “1” and those areas under low threat were categorized as “0”. These data were not a perfect proxy, as they only cover coral reef habitats, however, suitable global data for additional hard bottom habitats were not available.

All pressures are ranked for their differing affects on different goals. For each goal, the effect of each pressure is weighted ‘low’ (1), ‘medium’ (2) or ‘high’ (3). The actual data-derived value of the pressure is then multiplied by the weight assigned to it for that goal. That process is repeated for each pressure-goal combination.  The sum of those values divided by 3 (the (the maximum pressure-goal value) expresses the total affect of pressures on the goal.

The three components of Habitat Destruction are each weighted and evaluated separately for all Ocean Health Index goals. Various combinations of the three are used as Pressures for all goals except for Tourism & Recreation and Clean Waters.

WHAT ARE THE IMPACTS?

Habitat destruction can have a significant impact on marine biodiversity as species richness, abundance, distribution, genetic variation and inter-population dynamics are affected and entire ecosystems are altered by the loss of habitat.

When seagrass, mangrove and salt marsh habitats are destroyed, they are no longer able to sequester carbon dioxide (CO2) from the atmosphere and significant amounts of CO2, released from stored carbon, are emitted back into the atmosphere.

Ships can damage habitats with their hulls, propellers and anchors.

Divers and snorkelers can damage habitats such as coral reefs and seagrasses when in direct contact (i.e. breaking and trampling).

The installation and maintenance of pipelines and fiber optic cables on the seafloor can damage marine ecosystems and result in sedimentation and pollution.

Marine plants and animals are an important biological source of unique chemicals with potential for medical use.

More than half of all new cancer drug research is focused on marine organisms (Cesar et al. 2003).

Habitat destruction can result in a loss in commercially or recreationally important marine species, potentially impacting opportunities for exercise, relaxation or outdoor learning.

The destruction and loss of coastal habitats decreases shoreline protection, which can negatively impact human lives and property.

Loss and destruction of habitat for commercially harvested species (food and natural products) can reduce food and livelihood security.

Decreased shoreline protection due to habitat loss can affect coastal communities and industries that are exposed to climactic events (e.g., storms, floods).

WHAT HAS BEEN DONE?

Established in 1986, Leam Markham is a 235-acre community-managed mangrove forest and sea grass conservation zone in the Trang Province in Thailand. Years of collaboration between local conservationists, economists, scientists, grassroots activists, students and citizens have protected mangrove forests from logging, development and destruction for aquaculture, and seagrass beds from damage by trawling, dynamite fishing and pushnets. Leam Markham’s success has led to the introduction of an additional 10 community mangrove forests in the area, where inter-village committees are responsible for overseeing the sites and providing management for local resources.

SAVE OUR SEAS FOUNDATION

This foundation raises awareness regarding the degradation of coastal ecosystems and supports marine research worldwide.